A projected decline in gas production could result in a shortfall of gas-powered electricity generation (GPG) impacting New South Wales, Victoria and South Australia from the summer of 2018-19, according to information provided in the Australian Energy Market Operator’s (AEMO) 2017 Gas Statement of Opportunities (GSOO).

The GSOO report, intended to assess the adequacy of gas infrastructure, reserves and resources to meet demand in eastern and south-eastern Australia to 2036, outlines that gas producers have forecast annual production to decline by 122 PJ, from 600 PJ in 2017 to 478 PJ in 2021. Based on this information, AEMO advises additional production will be required to meet the needs for GPG and residential, commercial and industrial gas consumers.

"At a time when LNG export is dominating demand and supply of gas in eastern states, strategic national planning of gas development has never been more critical for maintaining domestic energy supply adequacy across both gas and electricity sectors," said AEMO Chief Operating Officer Mike Cleary.

This tightening of the domestic gas market will have flow-on effects to the electricity sector unless there is an increase in gas supplies and development. Without this development to support GPG, modelling suggests average electricity supply shortfalls of between approximately 80 gigawatt hours (GWh) and 363 GWh may be experienced in 2018–19 and 2020–21. The scale of these shortfalls would breach the reliability standard which aims to supply at least 99.998% of electricity demand.

Alternatively, if GPG gas requirements are supplied, then gas shortfalls of between 10 petajoules per annum (PJ/a) and 54 PJ/a are projected in the residential, commercial, and/or industrial sectors from 2019 to 2024 in New South Wales, Victoria and South Australia.

"The 2017 GSOO highlights the increasing interdependencies between gas and electricity, and supply and demand, and the need for the Australian energy industry to have a holistic "single energy view" to ensure long-term planning is carried out in the interests of consumers.

"Gas and electricity markets can no longer be viewed in isolation, as the overall convergence of energy markets in eastern and south-eastern Australia demands a single energy view from a national perspective. It requires holistic planning across the entire supply chain to enable investment decisions to be made in the long-term interests of consumers," said Mr Cleary. 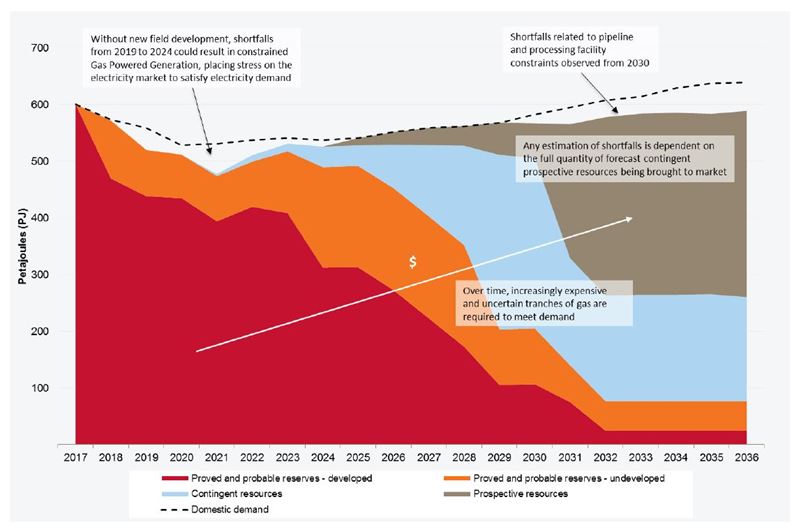 In the short term, AEMO has identified a range of potential industry responses that could mitigate both electricity and gas supply shortfalls, however notes that these responses rely on appropriate market signals, and may be impacted by considerations such as the retirement of coal-fired generators, and the direction of energy policy such as the existing moratoria on various gas developments across eastern Australia.

"Energy supply shortfalls could be mitigated in the short term by an increase in coal-fired generation and renewable energy output, combined with an uptake in technologies such as battery storage, together with increased gas production and the possibility of LNG exporters redirecting a small portion of their gas production to the domestic market," said Mr Cleary.

"Gas producers have told us that there is potential scope to increase production from existing fields if incentivised, although the size of the increase is unknown and new fields may also need to be developed to meet projected demand," said Mr Cleary.

The long-term outlook identifies that early investment in exploration and development programs will be needed to bring uncertain and undiscovered resources to market in time to meet forecast increases in demand for gas. Up to 5500 PJ of additional production will need to be developed to meet projected demand post 2030, although AEMO acknowledges that climate change policy, and emerging new technologies will influence future demand for GPG and the energy supply mix.

The 2017 GSOO uses demand forecast scenarios from the 2016 National Gas Forecast Report and forecasts production based on producer guidance, wholesale gas contract information, historical actuals from AEMO’s Gas Bulletin Board and other publically available information. The report is based on information available to AEMO as at 31 December 2016.

"We engage thoroughly with a broad range of gas stakeholders to achieve the highest quality input and accuracy, and we welcome the opportunity to continue to work with industry and government policy makers to maintain electricity and gas system security in a period of transition," said Mr Cleary.

The Victorian Gas Planning Report was also released today and provides annual supply (available and prospective gas) and consumption forecasts for Victoria for the next five years. The report projects potential gas supply shortfalls for Victoria over the next five years should market participants not carefully manage their gas portfolio, including storage balances. It has identified challenges in filling storage as a threat to system security.

Thank you for visiting. If you need more information, or have any feedback, please contact us at media@aemo.com.au