This section shows the impacts of the changed assumptions on annual consumption and maximum demand forecasts, compared to those published in 2017.

Details by region, sector and scenario can be explored from AEMO’s Forecasting Data Portal.

Overall, demand growth is expected to be driven by growth in population, the economy, and appliance ownership, while increasing rooftop PV penetration and energy efficiency measures are projected to have a dampening effect.

The Neutral scenario shows a flat outlook for consumption from the grid for the majority of the 20-year outlook, as increased usage by business and household consumers is offset by customer self-generation and energy efficiency measures. Towards the end of the outlook horizon, some growth is projected driven by increasing uptake of electric vehicles (EVs).

Consumption by Queensland’s coal seam gas (CSG) sector is only forecast to increase slightly over the forecast period. Its ramp-up to the current level has been the key driver behind NEM consumption growth in the last two years, but future growth is expected to be more modest as the liquefied natural gas (LNG) sector exporting most of the CSG has now reached a level close to capacity.

The coloured wedges above the dotted black line show what demand would have been, if the various factors that have reduced demand, and are forecast to reduce demand in future, did not exist. The biggest contributing factors to the slowdown of demand growth in recent years have been the uptake of rooftop PV and energy efficiency measures. The previous 2017 ESOO forecast is shown as the dotted grey line for comparison. It can be seen that:

The figure below compares forecasts under all scenarios with those published in the 2017 Electricity Statement of Opportunities. 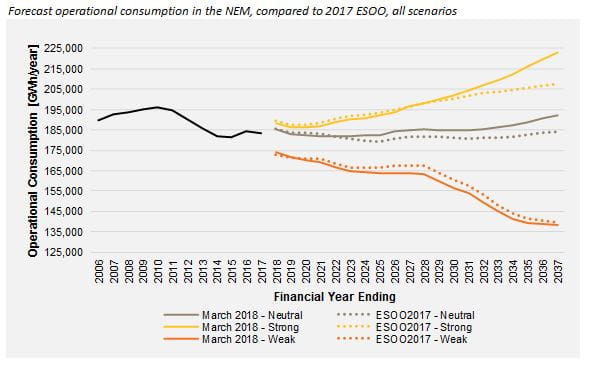 The regional maximum demands are forecast to grow faster than annual consumption, although the key drivers are similar. As rooftop PV reduces grid consumption while the sun shines, increasing installation of PV is shifting the time of maximum demand to later in the day, resulting in maximum demand occurring at evening hours with little or no rooftop PV generation. 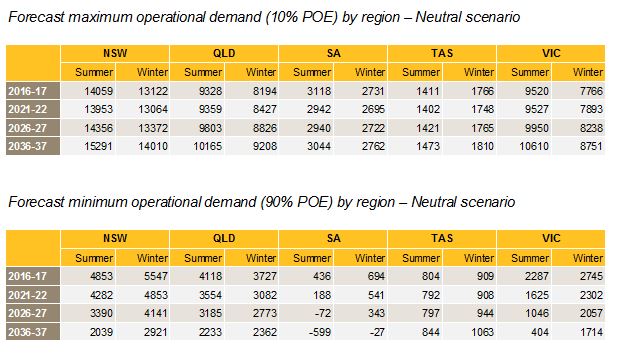 Compared to the 2017 ESOO forecast, updated assumptions around large industrial loads in Victoria, CSG electricity consumption in Queensland, and electric vehicle uptake, have driven the following changes in forecasts: